It has been many years since April and Ron Gill of Wildwood Dollhouses have visited our show. We are happy they will be dealers here in 2014. They have been doing miniatures for 35 years and do one of a kind structures, which can be found in many museums and private collections.

Three Ravens is a shop for witches with windows and doors of real leaded glass. There is a cave for making potions, and they are sold upstairs. Most of the bones are real bones.

The exterior of the Craftsman Kitchen is oak and the interior is cherry.

Wildwood Dollhouses can be reached at wwdhms@aol.com

Here is Jennifer Whittlesey’s introduction to our show. We welcome her.

“I began my artistic career as an embroiderer in the late 70's while homesteading in Prince Edward Island,Canada(our smallest province). Over a number of years my work became increasingly tiny and more intricate, so when I joyfully discovered Houseworks building supplies for sale in a hobby shop in the mid 80's, it was a natural transition for me to explore the possibilities of dollhouse miniatures, which I had loved as a child. Since then I have studied woodworking, moved to Vancouver and graduated from art school where I majored in painting and sculpture. I started my first business -Butterfly&Blue - last spring and am excited to see where this new venture will take me.”

Jennifer can be reached at http://www.butterflyandblue.ca

We are excited to announce that we have another dealer coming from England this year, Karon Cunningham of Karon Cunningham Miniatures. Six years ago she had not heard of miniatures. She has spent the past six years going to shows and traveling everywhere to find and represent a world class group of dealers’ works for our pleasure. Most items are one of a kind or made in limited numbers.

To see much more of what she has to offer, go to her website at http://www.karoncunningham.com

Jack Cashmere will be at the 2014 show, his second time at a Good Sam Show. Jack specializes in porcelain pieces in a variety of styles and types. Jack has been working with porcelain miniatures for a number of years, so we were delighted to add him to the show in 2013. Jack’s web site is http://www.cashmerescollectibles.com

The Santa Cruz Miniature Guild shared a delightful exhibit at the Good Sam Show in 2013. They met one afternoon a month specifically working on their Antique Shoppe, each member contributing things they had or made for the Shoppe. It is as crowded as a real Shoppe would be. The members of the Guild are Duane Adams, Marian Allen, Dot and David Blank, Lois Bruce, Sharon Fassio, Gloria Green, Carol Johnson, Constance Lombardo, Colleen O’Gara, and Jo Pollock.

Click on the photos to enlarge them. Thanks to Connie Sauve for the photos. 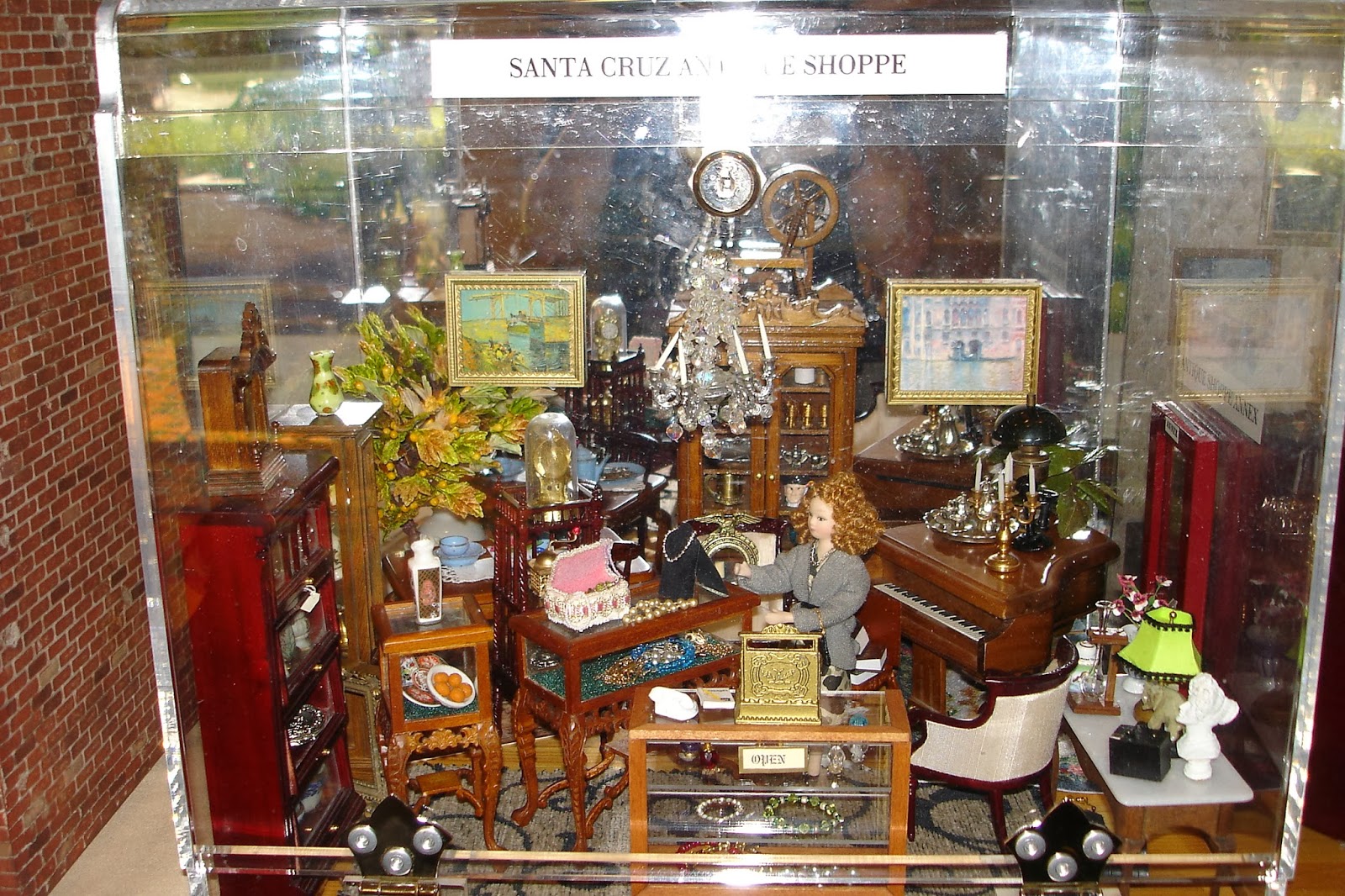 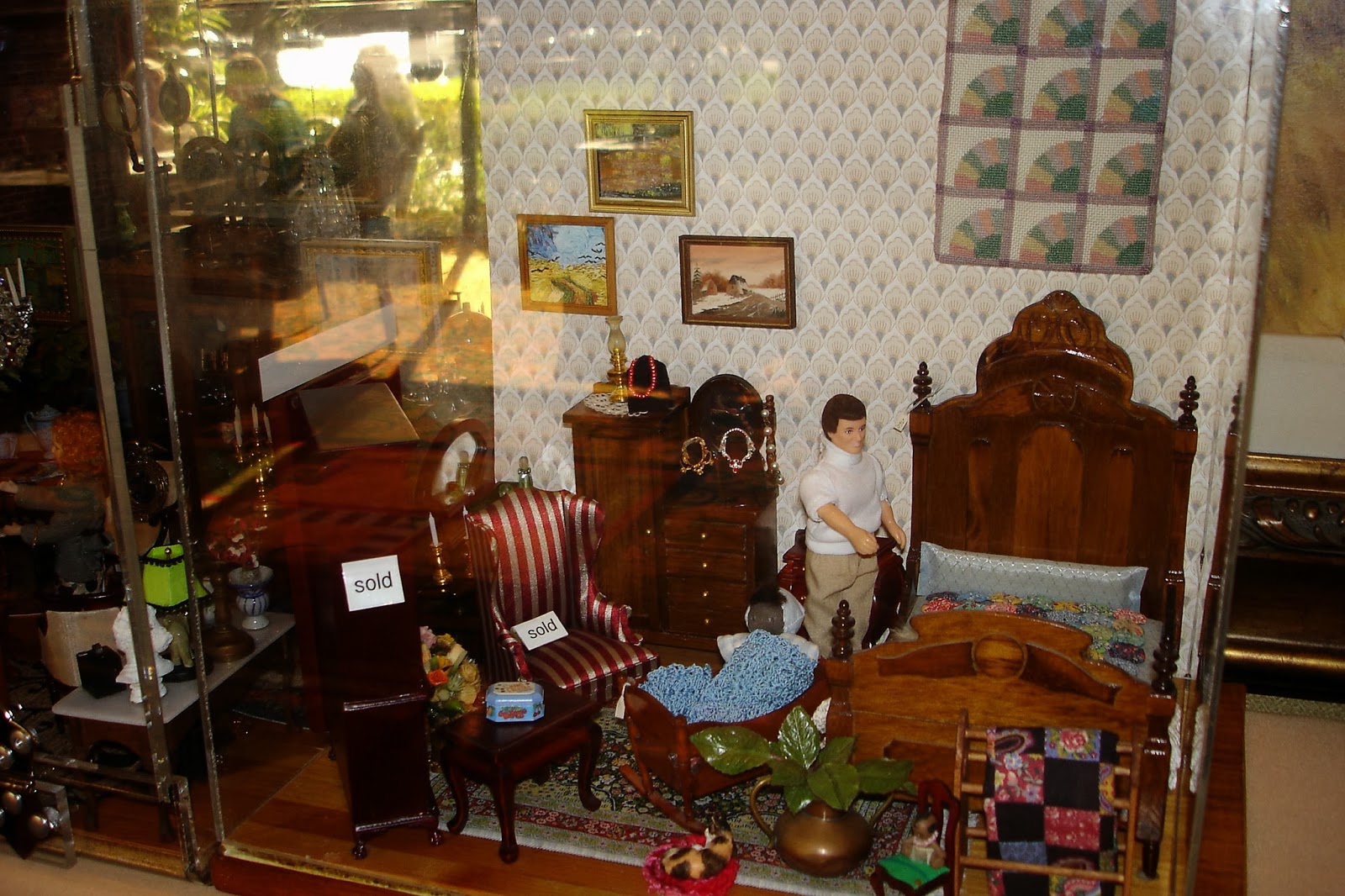 Our apologies, but everyone is all tied up this weekend, posts will resume next Saturday. In the meantime, maybe the picture below will give you ideas for a miniature scene. 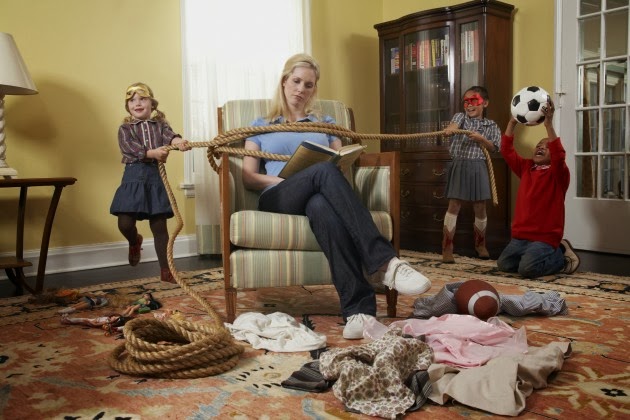